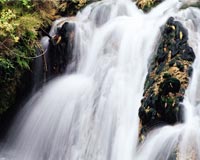 A hill resort of North India that boasts of the adage "The Queen of Hills", Mussoorie is a hot-pick when it comes to deciding a perfect holidaying destination in Uttaranchal. A place that is equally enticing for lovey-dovey honeymooners and an exuberant trekker; Mussoorie has a lot to offer to everyone. A 34 km winding drive from Dehradun takes you to its lap. Located on the Garhwal Hills, the hill resort juts out like a little paradise from a hilltop. The place seems like a unique mosaic of antiquity, mysticism and various hues. With a picturesque backdrop and bracing environs, the place is home to numerous tourist attractions. Learn more about the sightseeing tours in Mussoorie.

Lal Tibba (Depot Hill)
The highest point in Mussoorie, Lal Tibba gives you splendid view of the landscape around. Located in Landour, it is the oldest inhabited area of the place. Old British architectures adorn the place and impart it an antique charm. From here, one can have clear views of the snow capped Himalayan peaks and places like Badrinath and Kedarnath dotting the horizon.

Camel's Back Point / Camel's Back
Road The road borrows its name from a large rock here that looks like a camel's back. One can see the rock from the 'Mussoorie Public School'. The road starts from Kurli Bazaar and goes up to the Library Bazaar. Thick deodar trees girdle this 3 km long stretch. The atmosphere is veryserene and ideal for pony-riding and watching the sun playing 'hide and seek' in the Himalayas.

Gun Hill
At a height of 2122 m, this is the second highest peak of the town. During the colonial era, a gun was placed atop the hill and fired exactly at mid-day to announce the time. Thus, the place derived its name as 'Gun Hill'. One can have stunning views of the landscape and other Himalayan Ranges from the place. A 400 m ropeway connects the Mall to this place. Walking is another alternative.

Kempty Falls
Located 15 km from Mussoorie, the Kempty Falls lie amidst a mass of hills. Sparkling water gushes down from a height of 4,500 ft and further segregates into five different falls (40 ft each) at this place. Originally, the British conducted tea-parties here. Thus, the colloquial name 'Camp-Tea' earned it the name 'Kempty'. The falls remain open to public from March to July.

Municipal Gardens
Located about 3 km from Mussoorie, this beautiful picnic spot is easily accessible by a pony, rickshaw or car. Housed amidst bamboo and deodar trees, it was earlier known as the 'Company Garden'. The place has an artificial lake that provides boating facilities. Varieties of exotic flowers are also found in the gardens. One can also reach the place on foot, via Waverly Convent Road.

Jwalaji Temple
This famous Hindu temple is located at a distance of 9 km from Mussoorie. Dedicated to Goddess 'Durga', this temple is situated atop the Benog Hill, at a height of 2100 m. Enveloped by thick forests from all sides; the temple poses a striking picture. Moreover, one can have breathtaking view of the Himalayan peaks, Doon Valley and the Yamuna valley from this site.

Mussoorie Lake
This newly made lake is situated on the Dehradun road, at a distance of 6 km from Mussoorie. Developed by the city board and the Mussoorie Dehradun Development Authority, this lake is a famous picnic spot of the place. With a beautiful backdrop, the place is also famous for its pedal-boating facilities. The lake also offers enchanting view of Doon Valley and the surrounding places.

Van Chetna Kendra
Covered with a thicket of undulating pine trees and varicolored shrubs, Van Chetna Kendra is a popular picnic spot of the place. It is located at a distance of about 3 km from Mussoorie, on the Tehri Road (by-pass). Thus, it is easily accessible from Mussoorie by a vehicle or even on foot. The place is also popular for exotic wildlife delights like Ghurar, Kankar and Himalayan Peacock.