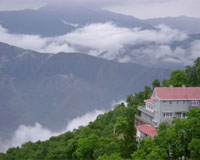 The enchanting hill resort of Mussoorie was discovered by an English army officer named Young in 1827. A land graced with all the endowments of nature's richness, Mussoorie was an exclusive colonial resort during the British Raj. However today, Mussoorie stands out as an ideal vacationing destination of North India. Located 34 km from Dehradun, it welcomes swarms of tourists every year with its blessed landscape and temperate climate. Be it the idea of beating the summer heat or just enjoying a perfect weekend, Mussoorie remains a favorite holidaying option among the people of the nearby plains. We have detailed the weather information of Mussoorie in the following lines.

Summers
Summers (April to June) in Mussoorie remain very favorable. Because of its high altitude, the hill resort escapes the extreme heat of summer season. The temperature rises to a maximum of 30°C and the minimum temperature is recorded at 10°C during this season. Thus, the summer months remain the "peak season" in Mussoorie and the place remains packed with a large number of tourists from the adjoining plains. Light woolens are advisable during this season.

Winters
Generally winters (late October to mid- February) in Mussoorie are very cold and spine-chilling. The mercury level may drop down to a minimum of 1°C during the nights. Days remain slightly foggy, with the sun being mild and placid. The temperature reaches to a maximum of 10°C during the daytime. Sometimes, occasional snowfall might lead to road-blocks in winters. Thus, the place remains scantily populated during this season.

Monsoon
The place experiences heavy downpour during the monsoon season (July to September). It makes the roads unsuitable for trekking and driving. The sky attains a mauvish tinge and mountains remain covered with sheets of mist. With the onset of the spring season in end-September, the place reaches its apogee of beauty. Lush vegetation abound the place and the town experiences a new lease of life. The best time to visit Mussoorie is either during the spring season (September to November) or between the months of April and June.